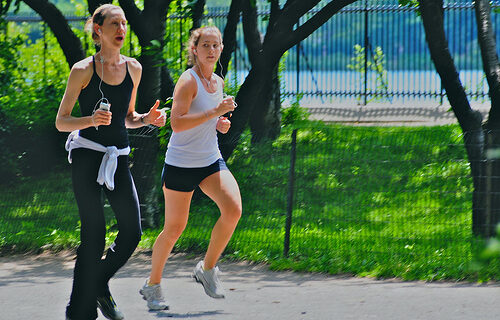 When I was a boy, my mother’s younger brother, my Uncle Howard, died. He was 50 at the time, which seemed quite old to me. However, as 50 approached, and I must admit that I will never see 50 again, I began to worry. Uncle Howie or, as I used to call him because I saw him so infrequently, Uncle Figment, died of a heart attack. I was overweight and did not exercise enough and I would soon be 50.

I resolved to get healthy. I would exercise more and eat better. But some days I just did not want to exercise and I didn’t. Sometimes the ice cream was too good, the pasta plentiful with a red sauce to die for (perhaps literally), and the cheese-I can never resist cheese. So having stumbled and failed in my resolve, I gave up. I soon succumbed to heart disease and died in my late forties.

Hmmm, something seems wrong with that. I appear to be alive. At least one the statements above must be false, either I was perfect and never messed up or I did fail, repeatedly and often, but did not give up. Anyone who knows me, knows that I fail and stumble all of the time. Therefore, I did not give up.

I will get up on the morning after having had a dinner of Blue Bell cookies and cream ice cream or a whole chicken and resolve to do better. I will go to sleep at night, notice that I have not exercised for two or three days and set the alarm to get me up to run in the morning. I have my moments of weakness and sometimes, moments that feel awfully close to despair, but I keep plugging along.

Where would I be had I given up? Probably in much worse health, if not dead. I am always backsliding and having to resolve to start again, but slowly, I am doing better and the accumulation of periods of better behavior have had a positive effect on my health.

Compared to trying to be a better person, trying to eat healthier and exercise more is a piece of cake. How we behave, our habits of reaction, they way we view the world or interpret the way other people act are ingrained deeply in each of us. These are, in some real sense, who we are. Changing ourselves in these fundamental ways is like a surgeon operating on herself with no anesthesia.

How can we do it? Even when we are blessed to see ways to make ourselves better, how is it possible to do so? In this, even with the greatest of resolve and effort, we will repeatedly stumble and fail. Surely there is no way to overcome the vast accumulation of bad habits of thought, action, and seemingly preprogrammed response. Beyond that, besides hurting ourselves, we have hurt others with our flaws-the mountain of pain we have each caused must be insurmountable.

The yetzer ha’ra says to man, “Why do you exhaust yourself for nothing? You have committed so many sins they are innumerable-it is impossible for you to repent for them all”…The yetzer ha’ra, the evil enticer, seducer, urge drive, presses on and on this way, cooling one’s connection to G-D, and leading one away from his teachings. Finally, one is thus led like an ox to the slaughter…”

This passage refers specifically to the sense of one’s own internal voice of doubt, of self indulgence, of self destruction telling one that it is impossible to repent from the multitude of sins one has committed in life. Similarly, this internal voice tells each of us that we cannot do better, we cannot improve ourselves, we cannot become better people. Doubt is good, but too much self doubt, too much lack of belief in our own potential for improvement is the path of madness and self destruction.

We know from our tradition and the record of so many flawed people called to serve G-D, that even the most broken vessel can do great good and change into better version of himself or herself. Indeed, sometimes it is an individual’s very flaws that are the channels that allow that person’s inner light to shine forth and convince others that they too can become forces for good in the world; they too can change for the better.

The only way to insure failure in the task of becoming a better person is to not try. We will always have our failures and backsliding. No one achieves the goal of self-improvement immediately or fully. It is only through trying and failing, trying and failing over and over again that the gradual work of self reformation is painfully and imperfectly done.

Rabbi Levi Yitzhak of Berditchev, at the bedtime Sh’ma, would look back on his day and say that he was sorry for what he did not do right and the tomorrow he would do better. Then he chided himself, saying, “But Levi Yitzhak, you said the same thing yesterday!” Then he would say, “Yes, but today I mean it.”

Every day, we must try anew to be better than we were. This evening at the start of the ten days of awe, at the beginning of a new year, at the opening of the birthday of creation is the perfect time to start to reflect anew about how we can be better people, more kind, more generous, more attentive, more authentic, more centered, more active in the repair of our broken world.

I do not believe we can be miraculously cured of our flaws. G-D’s presence is always available to enfold us and comfort us. But as with a parent whose child is learning to walk cannot walk for his or her child, G-D will not, cannot walk for us. G-D can only encourage and show us the way. THE HOLY ONE can only love us as we fall again and again in our efforts to take each halting step.

There is no pill one can take, there is no formula one can follow to instantly reform oneself into a better person. There is only the daily struggle to be the kind of person each one of us would like to be. May you be granted the strength to know your flaws and the wisdom to realize that imperfection is the common heritage of humanity. May you be granted a vision of your better self and the knowledge of your amazing potential for strength, gentleness , and beauty. May you believe, as R. Nachman of Breslov said, that if you can break, you can also repair. And may each of us have the fortitude along with R. Levi Yitzhak to start anew over and over again and each time be able to say from the depth of our beings, “This time I mean it.”