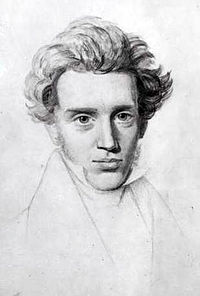 Soren was born to a wealthy man and his maid in Copenhagen, Denmark in the early 19th century. Soren’s mother had an indubitable effect upon his outlook yet is conspicuously absent from his later writings. Perhaps this is because Soren’s father–Michael–was such an enigmatic and powerful figure.Michael had an incredible impact upon Soren and would enter into his later writings with force and a distinct voice as Soren struggled with the hardest questions he could find armed only with ink and paper. Michael clearly felt that he had lived a life worthy of punishment and fully expected the punishment for his own sins to be visited upon his children. It is likely that he suffered under this feeling for most of his life and remained haunted by it even as his wife and some of his children died before expected. The effect that this had on Soren must not be underestimated and it brought a fierce passion into his writing and analysis. Further, it filled him with an existential dread that likely helped to launch a whole system of philosophical thought.

Soren received an excellent education because of his father’s wealth yet this only happened because it was a sizable inheritance left to him and his family after Michael’s death. As Michael lie dying on his bed, he expressed to Soren that his great wish was that Soren might become a pastor and serve the people of God as a leader and minister. Indeed, Soren felt obligated to acquiesce to his father’s desire and attended school and studied Latin, history, and theology. Yet, it became increasingly clear that God had another calling for Soren. Soren would be a Christian leader but would do so by attacking the Church he alternately loved and despised even as his older brother became a pastor (later, a bishop). Carrying the burdenthat his father had carried, Soren was overwhelmed with angst and confusion brought about by the disparity between the ideal and the real. 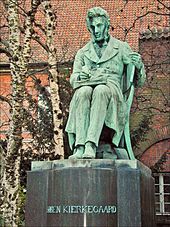 He met a beautiful woman named Regine and was immediately struck breathless by her. Apparently, she was attracted to him as well. They courted for some time before Soren enthusiastically proposed to her. She gladly accepted and they began planning a wedding. It seemed that Soren was never as happy as when he was with his beloved Regine. Yet, he was haunted by a feeling that he was unfit for such happiness. The high calling of the ideal made his melancholy even more bitter and he broke off the engagement a little over a year after he proposed. He regretted it for the rest of his life. Soren felt himself unfit for marriage and perhaps unfit for happiness. Consequently, he became so.

Soren’s philosophical career is especially notable. His works have had an inestimable impact upon all of Western philosophy and countless students who become enamored with the ideas he laid out in his meticulously clear writing. His devotion to “what should be” in the face of “what is” constantly drew his vision upward and he guided countless others to look skyward as they considered calling and the way things should be. He sparred with the likes of Hegel and Socrates with little fear but much trepidation. His work was appreciated in his lifetime and his thoughts laid the groundwork for all of existential psychology.

Soren was a vocal critic of Christendom as the end of his life approached. It was not Christianity that he lampooned with his pen but churches that operated as morgues and social clubs. His fury with the Danish State Church can be felt fresh and hot as one reads over his critiques and outrage. He insisted that there was no value in community if the individuals were dehumanized. In other words, simple communion of faceless people was worthless. Rather, community found value in uniting the separate and different without stripping them of their uniqueness. Soren cringed at the thought of a Church that expected everyone to look the same and sound the same. Soren saw this for what it was–conversion to another gospel and conversion away from Jesus who proclaimed release for captives and sight for the blind. An indifferent group of people was no community but, rather, a collection of those who had turned over their selves to escape their dread and anxiety. As Soren lanced his opponents, he lanced himself. He was painfully aware of his own dread and melancholy and the burden it was to him. Yet, he continued to push forward and look upward for “that which should be” instead of settling for “that which is” and mediocrity of spirit.

Soren died in 1855 and was buried by the Church he had opposed and railed against.

Read more from Joshua at his personal website and the website of Grace and Main Fellowship, the non-traditional community he ministers with.