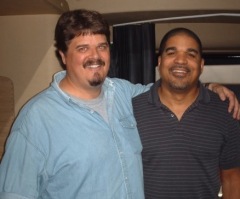 Bert Montgomery & Oteil BurbridgeThis is the second in a two-part series dealing with the “N-word” and White guilt. Oteil Burbridge is an internationally renowned bass-guitar funkmeister who plays just about anywhere with just about anybody when he’s not busy touring as the bassist with the Allman Brothers Band.

Oteil:    Nigga, please! It’s one of my biggest causes! “Nigger” is simultaneously one of my favorite, and least favorite, words. Blazing Saddles is my favorite movie, so I’m always harping on this. I love how Mel Brooks dealt with it. That movie couldn’t be made today.

B:    This rewriting of Huck Finn bothers me – Why are we afraid to allow it to be said in its historical context? I believe in letting the word exist lest we forget the intention behind it (sort of like everyone in the Harry Potter stories refusing to say the name “Voldemort”).

O:     This situation is EXACTLY like “He-Who-Must-Not-Be-Named.” I think until Blacks give up using the word then no one else should have to.

B:    Does it offend you to hear White people say “nigger”? I’ll be honest – I feel very uncomfortable saying it to you right now.

O:    One of my White friends is as big of a Blazing Saddles/Richard Pryor/Dave Chappelle fan as I am. We realized how silly this word’s power was when he and his friends were afraid to quote parts of Pryor’s routines for fear of offending me. I was stupefied because I realized what an awkward position we let a mere word put us in. It also taught me that the tongue is in fact mightier than the sword. If a White (or Black) person doesn’t mean it in a hurtful way I don’t take it that way. If my White friend is merely quoting our favorite part of a Richard Pryor routine, then why would it offend me?

B:     Yeah, but eventually, Pryor made a public renunciation of “nigger” and quit using it. It was after a trip he took to Africa.

O:    I remember when that happened to Richard. It was pretty profound for him, I think, because he had never been in a country where Black people ran everything. In his mind Black people were always the underdog. But he is wrong when he says that the word “nigger” only means one thing. He forgets that Nigeria and the Niger River have something to do with it, too. While Richard may later have repudiated that word, he also popularized its use in the context of stand up comedy. I think that scared him later – and with good reason. Most of the other Black comics use it because it gives them a sense of rebellion. Dave Chappelle is the only one I’ve seen so far that actually uses our preoccupation with, and feelings toward, the word more than the word itself. Richard made a career out of more than just that word though. His characters were what really captured people. But characters like Mudbone said “nigger” a lot. Richard was being funny and used street language. That’s how everyone talked in the ghetto (or, in the country like with Mudbone), and he just reflected that. I’m really glad Richard co-wrote Blazing Saddles with Mel Brooks before he “converted.”

O:    For my specific White friend and me it actually is now the highest compliment that we could pay somebody. In our world only niggas …

O:    Make sure you pronounce it “nigga,” please. It makes all the difference! The -er on the end really can get you killed!

O:    Anyway, in our world only niggas can accomplish certain things (whether they be White or Black). Dick Cheney could never funk like James Brown and Sly Stone, or make you cry like Mahalia or Aretha, or make you laugh with characters like Richard Pryor or Dave Chappelle. This also implies (in our reversed world) that Jesus is the HNIC and Satan is Whitey.

O:    Conversely, “Whitey” is a state of mind and not limited to race. Any oppressor is “Whitey.” When we say “kill Whitey” we don’t mean a specific race. Mobutu is Whitey, too.

B:    I’m still stunned by your description of Jesus as the HNIC …

O:    I love Tony Campolo’s story about the pastor who preached that Jesus was a nigger because he purposely came to earth to be a slave, to be despised, to be wronged, etc. … Jesus said that “the last would be first.” So, who would have been first to inherit the Kingdom of God throughout most of this country’s history?

B:    Wow – that’s powerful! The Gospel according to Oteil …

O:    I want to clarify that when I say that “‘nigger’ is simultaneously my favorite and least favorite word” I am referring to what is essentially two different words, reflected by their different spellings. And, I want to clarify that the reason it would even be my favorite word at all is because it it focuses like a laser on so much that we need to get past in this country. Racism is the defining issue of my parents’ life and many others’ as well. It’s hard for younger non-Black people to understand how much of an impact it has had. While I think we need to get past it and realize that ALL people are “fallen” and will divide and segregate over any tribal difference (race, religion, ideology, nation, language…), we also can’t pretend racism never happened/happens in this specific way against Blacks in this country. To take this word’s power away it will require us to not be in denial of it through banning use of the word. Some Blacks will not give up using it anytime soon anyway. I probably won’t either. Making White people who are true fans of Richard Pryor or Dave Chappelle feel guilty about repeating some of their funniest lines is also ridiculous. Of course a lot of Blacks’ attitudes towards each other concerning color and hair are pretty ridiculous and surprising. I say we ALL cut the crap and just call a spade a spade. Sorry, I just couldn’t resist…

O:    Have you seen the movie Good Hair by Chris Rock? Its a friggin’ mind blower. Many in the Black community are just as self-hating, prejudiced and homophobic as anyone else. A Black friend told me that a lady at a bar once told him that he was very nice and that she really liked him a lot, but that she could never really be with him because he wasn’t quite dark enough. Strange criteria.

B:    Thanks for your time, Oteil. Got any last words?