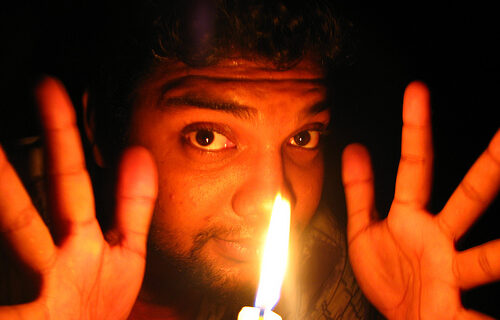 Let us consider the sacrificial cult in the days when the Temple stood. Here we are worshiping an infinite, omnipotent G-D and somehow we expect that sacrificing a goat will effect G-D, even cause G-D to change G-D’s mind. We can look back from our lofty vantage point of modern civilization with a tolerant smile at our ancestor’s actions. Surely, from our sophisticated point of view, the Temple service is somewhat amusing. “Oooooo, the creator of all that is is mad at me, I think I will burn up some pigeons so everything will be alright.”

Not like us moderns, so much more sensible in our ritual and religious practice. Really? Praying? Bowing? Blessing candles, wine, and bread? The whole panoply of mitzvot and Jewish practice somehow serves G-D? Do we somehow think The Creator and the Sustainer of all that is is somehow served by our actions? Looked at from outside, doesn’t it all seem a bizarre comedy? Seriously, even if one posits a deeper reality, the existence, however we mean that, of G-D, can we somehow serve G-D? Looking at things dispassionately and intellectually, it all seems rather silly.

I am taking a leaf here from the analysis of Rabbi Nachman of Bratslav’s story, “The Humble King” given by scholar Zvi Mark. In looking at the story, Mark comes to the conclusion that Nachman held that our attempts at worship and service are really rather ridiculous. Who, in analyzing our actions could view them as anything other than madness. Yet Nachman prays, keeps the commandments, and seeks to serve G-D. What rescues these actions from pure entertaining silliness for Nachman?

No service of G-D is literally service of G-D-rather, it is all ‘as though.’ The only thing that has value is a person’s desire to come close to G-D, and his desire, which cannot actually be fulfilled, to serve G-D.

These longings and yearnings are the important element in the service of G-D. Attributing independent meaning to various acts of serving G-D such as Torah learning, praying, and miztvot is ridiculous, foolish, and laughable. Only the view of performing mitzvot as mad acts of love transforms them into something forgivable…Acts and games of love have no intrinsic value and, if judged in isolation from the love that impels them, appear as embarrassing acts of madness, without rhyme or reason. So too the value of a religious deed derives from the fact that it is the fruit of love; without desire and yearning, it is simple foolishness.”

This is not to say that Nachman does not want us aware of this. He very much does. In fact, this awareness that we are acting purely out of longing, love, and the desire to cleave to The Holy One seems to be considered a more elevated level of spiritual attainment than simplicity. We are aware that we are as comedians before The King, our purpose is fulfilled if we know that we are comedians. If we take ourselves too seriously then we are merely sad. We offer up a gift we know has no worth in itself merely because we are compelled by our desired to serve and be close; we must do something, anything! Nachman would yet have us carrying out the traditional practices as driven by our yearning, writing, “we learn as if we are learning and pray as though we are praying and perform mitzvot as though we are performing mitzvot.” He writes elsewhere, “And in truth, according to G-D’s greatness, be He blessed, all these modes of service are nothing, but everything is in the way of “as though,” klamersh, for everything is merely a joke when compared to G-D’s greatness, be He blessed.”

There is much that is attractive in the ideas of Nachman as elucidated by Zvi Mark. We understand the unutterable awesomeness of The Holy One and must wonder what can any human being do that will be of service to G-D. Indeed, I have stated before that the efficacy of ritual is to place the worshiper into a receptive mental, emotional, and spiritual state in order to more effectively reach out to G-D. That is, the ritual is in the service of longing and the desire for closeness with The Most High. Similarly, the acts of mitzvot and the round of daily blessings keep G-D before us and remind of the Omnipresent One and help us to infuse the mundane course of our lives with a sense of the deeper holiness that is always there and, thus, help us to cling to the source of holiness. Yet, I do not find this the only way we can serve G-D. That is, I believe we can serve in a way beyond merely “as though” and have the attempted service be of worth not only as a conduit for our longing and a sign pointing to our desire to cling to G-D.

There is an older image from an earlier strata of Hasidic thought. This is the image of G-D as a father and people as G-D’s children. As a father will take delight in playing with his children, we should not make the mistake of believing that the father is on the same level as his children and that the play, though bringing enjoyment to both father and children, is on the same level as the concerns and activities of the father. I also find this image useful and meaningful, yet there is one other way, still on the level of a parent taking delight in a child, but of a deeper level than childish play, that I find useful.

When my daughter, Kate, was a school girl and away at camp, we would, each summer, receive a report on what and how she was doing from her counselor. I remember one summer the counselor reporting that Kate would try to resolve differences and make peace between girls who were fighting and that she would reach out to girls who seemed to be alone and without friends. I took and, indeed, still take great pleasure in this. I received no direct benefit from the action of my child, yet I drew delight and pride from it. My child was growing into a compassionate adult, a peace maker and source of kindness. It would not be a usual way of looking at it, but in becoming a person I was proud of and admiring of, my daughter was serving me.

It may be foolishness on my part, but I believe G-D delights when we live up to the divine image in which we are all made. When we strive and succeed in some measure in being our best possible selves, there is some analog of the silly grin I get on my face sometimes when thinking about my children.

Perhaps it is only in our longing for closeness to G-D that our religious acts have meaning. Or, it could be, that like a parent playing with a young child on the floor, G-D takes delight in our childish attempts to serve him. Each of these holds some truth. But I believe it is when we partake of The Holy within us and act ethically or with kindness or seek to serve others selflessly, that, as a parent seeing a glimmer of an amazing adult growing out of his or her child, G-D takes pleasure in us and is so served.